Skip to content
Home/Uncategorized/Nothing compares, nothing -The worlds best SE 35 watt class A amplifier-
Previous Next

Nothing compares, nothing -The worlds best SE 35 watt class A amplifier-

It’s so close! The worlds best by a wide margin ultimate Whammerdyne amplifier “Relentless”
This started life as an extension of pushing the design limits of what Whammerdyne pure DC coupled amplifiers topology is based on. The huge challenge was developing a pure Triode single ended amplifier with all power supplies fully regulated including the over 860-volt regulated DC supply for the GM70 Triode power tube. No small feat mind you it’s very difficult to design a safe and stable regulated supply of this rating, current wise it can deliver a sustained 300 Milliamps of current and not even break a sweat. (the power transformer is a very low DCR design and is fully vacuum impregnated so its dead quiet acoustic noise wise) The output transformer is  custom built  by the famous Monolith Magnetics in Belgium. These are truly the best of the best. (Whammerdyne has been using their very special transformers for over 10 years always 100% meeting/exceeding design specification)
The next goal was to have zero capacitors in the coupling circuits, yes fully DC coupled and we have integrated the famous Z direct topology that allows for biasing the output tube with fixed bias not cathode biased! The filament or “cathode” in the case of this direct heated Triode one side is grounded so there is no current limiting when the tube is modulated to high output levels. (BTW, the Thoriated filament is current sourced so its impedance has no effect on the audio signal! and balanced) The slew rate is extremely fast with near zero phase shift in the audio band. Next, we have a bandwidth of over 3 Hz to 105 kHz and a front-end bandwidth of 400 kHz and no current slewing when driving the input capacitance of the power Triode or even into A2 operation when it draws grid current.
Put all this together and you have the worlds ultimate power Triode SE amplifier with zero feedback our measured hum and noise on the output is 120 micro-volts. That’s lower than most solid-state amplifiers. It was an insane project to develop and build. So here it is, or at least one of the two mono blocks playing on the bench. Oh, I almost forgot 35 watts sustained output power into 8 Ohms and 38 watts peak power. We are running this famous tube (GM70 copper plates) at 75% of it’s rated plate dissipation capacity of over 100+ Watts. It will last for years at this power furthermore it’s an insanely linear tube having a near perfect spectral decay.
Will it be for sale nope. (at least unless you wish to spend a lot) it’s a very expensive and complex unit and would need to be at 50K a pair too be viable in the market. Its one of our crowing achievements at Whammerdyne. The best of the best
Head Whammer, “The Relentless Pursuit of Audio Perfection”
PS: I will post spectrum and power analysis tests soon as well when the pair when totally finished (glamour pix too!) 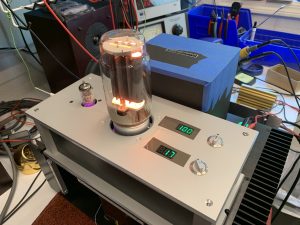 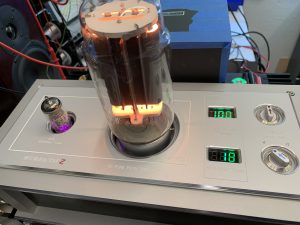 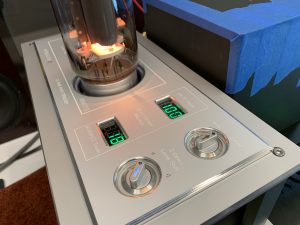 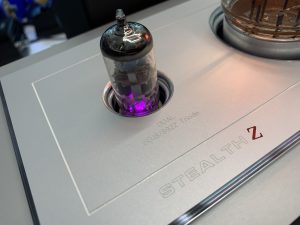 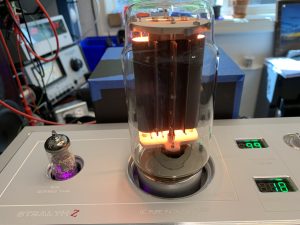 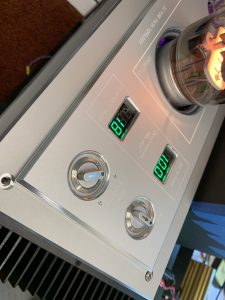 About the Author: Pat Hickman